This is the second part of a three-part series, “What A Waste: Why We Have To Stop Throwing Food Away.”

A pile of food waste can make rich compost for the garden. But some Northwest companies are going beyond composting. We discovered three companies that are turning it into energy to power homes, race cars and city buses.

Summit Foods of Cornelius, Oregon, primarily makes dried fruit. But the process of making dried fruit leaves his company with lots of sugary waste juice. The company has found a way to turn that waste – along with expired or rejected foods from other businesses – into race car fuel. The process involves fermenting and distilling it into a very pure alcohol it can sell as ethanol fuel.

“We’re hand-crafted, the microbrew of fuel,” says Summit Foods owner Mark Smith. “We’d like to at some point do millions of gallons a year of waste-stream ethanol, and we’ll just keep working on it until we get it.”

Watch video of a race car that runs on food waste:

2. From Compost Bins To The Grid

Another Oregon company, JC Biomethane of Junction City, is turning food waste from Portland businesses into electricity. That project uses a methane digester to extract gas from the food. Then it burns the gas to generate enough electricity to power more than 2,000 homes. The digester can’t process cardboard or compostable plastic, though, so many Portland businesses will be limited to putting only food scraps in their compost bins starting in March, 2015. 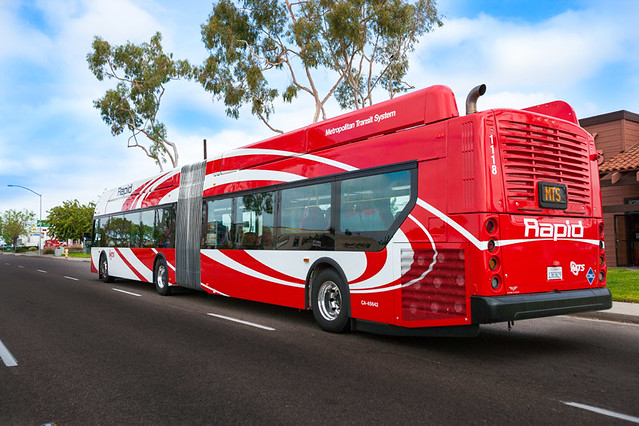 The City of San Diego runs its fleet of buses on compressed natural gas. It is the first customer for the biogas that a company called Novus Pacific plans to make out of onion and potato manufacturing waste in Boardman, Oregon. Courtesy of the City of San Diego

Novus Pacific of Minneapolis, Minnesota, is planning to build an advanced anaerobic digester in Eastern Oregon to turn food waste from onion and potato manufacturers into biogas. Instead of using that gas to make electricity, as JC Biomethane does, the company will just sell the gas.

“The natural gas we’re producing in the end, from a chemical perspective, is indistinguishable from regular natural gas,” says company CEO Joe Burke. “So, anywhere you would traditionally think of natural gas being used, our natural gas could be used there as well.”

The Novus biogas can be condensed and funneled into vehicles that run on compressed natural gas. The city of San Diego is the company’s first customer. It plans to use the gas to run its fleet of city buses.

Check out our special project, “What A Waste: Why We Have To Stop Throwing Food Away:”

Tuesday: No One Said Curbside Composting Would Be Easy

Thursday: In Western Washington tune in Thursday, Nov. 20 at 7 pm when KCTS9’s IN Close takes a look at food waste.

US Court Dismisses Suit By Youths Over Climate Change

Portland's Fullbright Shows How To Create An Award-winning Video Game