State Sen. Doug Ericksen, R-Ferndale, takes a morning walk with his father, Len, at the Bellis Fair mall in Bellingham. More than $200,000 of the campaign money being spent to unseat Ericksen can be traced to climate activist and billionaire Tom Steyer.

Environmental groups are among the biggest spenders in this year’s state elections in Washington and Oregon, pumping hundreds of thousands of dollars into campaigns to ensure Democratic statehouse control.

Most of those dollars are coming from California billionaire Tom Steyer — the biggest super Pac donor of this election cycle nationwide.

In the face of gridlock at the federal level, NextGen Climate says it is invested in effecting change at the state level - singling out Washington and Oregon as fertile ground for political action on climate change, and funneling more than $1 million into state senate races in the two states.

“With pro-climate action governors in both states, NextGen Climate, in conjunction with its partners, will implement a program to identify and mobilize climate action voters to ensure that both Washington and Oregon have a pro-climate majority in their respective state legislatures in 2015,” the group said in a recent press release.

Races To Watch, Majorities To Secure

With less than two weeks before Election Day on Nov. 4, most of that environmental campaign spending in the Northwest has gone to three Washington state Senate races. Environmental leaders consider them critical to their ability to move their agendas through the Legislature.

“We feel that we need a pro-environmental, pro-climate action state Senate so we’re really focusing on the state Senate this year,” said Shannon Murphy, executive director of the Washington Conservation Voters.

Key Races For Environmental Groups
Three Senate races in Washington have emerged as battlegrounds where environmental groups want to unseat incumbent Republicans. Donations and independent spending for all candidates in those races have mushroomed compared to others. (Credit: Tony Schick)

Murphy’s group received $750,000 from NextGen Climate. That money is being used exclusively to benefit Democrats in this election. The Washington Senate is now controlled by a coalition of Republicans and two conservative Democrats. That majority would give way to Democratic control if the environmentalists’ strategy works.

The environmentalists’ strategy is similar in Oregon, where NextGen has contributed $70,000 to the Oregon League of Conservation Voters. The OLCV is aiding Sara Gelser’s bid to unseat Sen. Betsy Close, R-Albany, and Chuck Riley’s challenge to Sen. Bruce Starr, R-Hillsboro. The group is also spending on behalf of Sen. Alan Bates, D-Medford, who is being challenged by Republican Dave Dotterrer. Success in those races would mean continued Democratic control of the Senate.

The way OLCV Executive Director Doug Moore sees it, campaign spending by Steyer and his climate-focused NextGen is leveling the playing field for environmental groups as they compete against major donors like the Koch brothers, billionaire industrialists and Republican donors whose holdings include oil refineries, natural gas pipelines and coal suppliers.

“The reality is that until the environmental community demonstrates that there’s a political price to pay for opposition or inaction on the environment and on climate, candidates aren’t going to take us as seriously as they should,” Moore said.

A Battleground District In Northwestern Washington

In Washington, Ericksen’s race against Democratic challenger Fleetwood may present the greatest challenge for environmental groups. Ericksen’s largely rural district on the border with British Columbia is a battleground for both parties. In the last general election, President Obama carried a majority of the votes cast within this legislative district, but so did Rob McKenna, the Republican nominee for governor.

It’s a district where being affiliated with a California billionaire environmentalist could hurt a candidate, said Todd Donovan, a political science professor at Western Washington University in Bellingham, part of which falls inside the boundaries of Ericksen’s district.

“There is maybe a political cost to having an association with Tom Steyer’s money and the groups that are spending Tom Steyer’s money probably want to stay a couple steps away from it, and the candidates that are going to be benefiting from it might not want to say that they are,” Donovan said.

Washington Conservation Voters is spending more than $350,000 with the help of Steyer’s super PAC in support of Fleetwood’s bid to unseat Ericksen.

And Ericksen doesn’t hesitate to attack his Democratic opponent for being affiliated with Steyer’s money. “I think the people of Whatcom County can see past out-of-state billionaires trying to buy elections. I think they’re smarter than that,” Ericksen said.

Ericksen served 12 years in the Washington House before being elected to the state Senate in 2010. He refers to himself as an environmentalist, to the dismay of conservation groups opposed to Ericksen’s policy positions on issues such as carbon emissions limits and oil train safety.

When asked three separate times during a recent interview if there is sufficient scientific evidence that emissions from the burning of fossil fuels contribute to global climate change, Ericksen declined to answer the question directly.

Hear how Sen. Doug Ericksen responds when repeatedly asked for his views on human contributions to climate change:

As chair of the Senate Energy, Environment and Telecommunications Committee, Ericksen invited a retired geology professor who is also a climate change skeptic to testify that CO2 emissions do not contribute to global climate change.

Oil refineries are among the bigger employers in Ericksen’s district, as are the agricultural and forest-products sectors.

The single largest source of funding for Ericksen’s current campaign is the group People For Jobs Enterprise Washington, which has spent more than $100,000 in support for Ericksen and attack ads against Fleetwood. The group has raised more than $800,000 this year from business interests that include real estate agents, builders, farmers and the petroleum companies Chevron and Tesoro.

This year Ericksen also received the maximum individual donation from both BNSF Railway and Pacific International Terminals Inc., both companies with a financial stake in a controversial coal export project proposed for Cherry Point, which is in Ericksen’s district.

Ericksen came under fire after a 2013 investigation by public radio stations and the AP revealed that he had received more meals from lobbyists than any other member of the Washington Legislature. Many of the lobbyists who treated Ericksen represented energy and oil companies, such as BP. Ericksen has said it’s part of his job to stay connected with the major employers in his district. 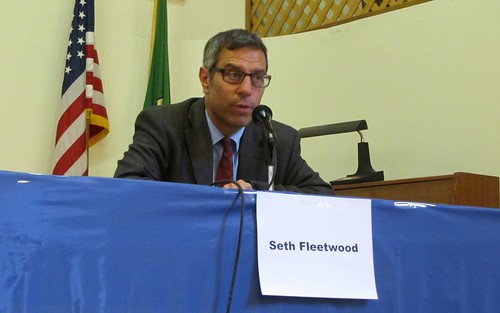 Seth Fleetwood, a Democrat from Bellingham, is challenging Republican Doug Ericksen for his seat in the Senate. Credit: Ashley Ahearn

Challenger Seth Fleetwood has downplayed the importance of the environment as a key issue in his campaign to defeat Ericksen.

“It has equal footing with a whole series of important issues,” he said.

As for contributions from Tom Steyer and NextGen Climate, Fleetwood was quick to distance himself.

“I have received nothing personally from Tom Steyer. I’ve never met the man,” he said.

However, Fleetwood said, Steyer’s money brings Democrats closer to equal footing with Republicans whose campaigns have enjoyed the financial support of oil, gas, and coal interests.

“The Koch brothers have been doing precisely the same thing, except to a much greater degree, all over the nation for years and years,” Fleetwood said. “When another rich fellow who happens to support environmental causes… does it, Republicans cry foul. So I think there’s a degree of hypocrisy in it.”

Political scientist Donovan says outside money coming into a hot legislative race is nothing new.

“That’s why people hate Congress. Because as an institution they see them all getting money from special interests and corporations,” he said.

Donovan went on to suggest Tom Steyer’s motives are different than those of, say, the Koch brothers.

“I’d be worried, if it was all money from one narrow corporate agenda,” he said. “But Steyer, he’s not promoting Tom Steyer’s hedge fund business. It’s just his pet issue as a billionaire.”

Tony Schick contributed to this report.

Correction: Oct. 28, 2014. An earlier version of the bar chart on this page misrepresented the total amount spent on each state Senate race. The chart has been updated with more recent data.

REBROADCAST: Women Of Color In Politics