Mike Crumrine adds dye to an herbicide mixture so that he can see where he applies it. Crumrine is applying herbicides to an invasive plant, ribbon grass, that is choking Oregon’s Metolius River.

SISTERS, Ore. — Looking at the banks of the Metolius River in Central Oregon, nothing really looks wrong. But train your eye a little, and you start noticing large patches – even entire islands – covered in a thin, green grass.

Forest Service ecologist Maret Pajutee has trained her eye and turned her thoughts to the words of a 20th century ecologist.

“Aldo Leopold said that living with an ecological consciousness is like living in a world of wounds,” Pajutee said.

The wound on the Metolius River is ribbon grass.

Its bunches of leaves have squeezed out native sedges and wildflowers. Once the wildflowers are going, so are the pollinating insects.

Pajutee said rumor has it the plant came to Oregon in the 1950s, when someone planted the ornamental grass in a flowerbed. Then, like most invasive plants, it kept growing.

“I think the reason it’s done so well here is the character of the Metolius, in its spring-fed nature. It really found the perfect home, where it can spread,” she said. 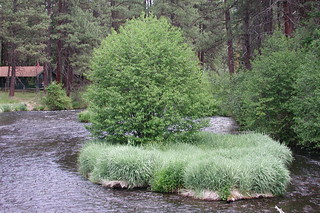 Ribbon grass is found throughout the Northwest. It’s relatively contained, but here on the Metolius, it’s growing like crazy.

The Metolius is designated a wild and scenic river. It’s known for its pristine waters and fly-fishing. It’s home to Oregon’s healthiest bull trout population and recovering sockeye salmon runs. 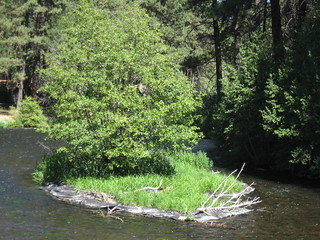 One of the big concerns is that ribbon grass doesn’t provide a lot of cover for fish to hide in the winter.

That’s why this year the Oregon Legislature listed ribbon grass as an official noxious weed.

One organization trying to get rid of the ribbon grass is the Friends of the Metolius. For years the conservation group tried several tactics.

First it covered a tiny island with black tarp. The hope was that less sun would kill the ribbon grass. The left the cloth on for three years.

“As a treatment method, it’s slow. It’s very harsh because you kill everything,” said Pete Schay, who’s heading up the group’s efforts to kill ribbon grass.

That tactic was also expensive.

Then, the group handpicked it. If you think pulling weeds in your yard is backbreaking labor, you’ve never tried pulling ribbon grass from a stream bed. 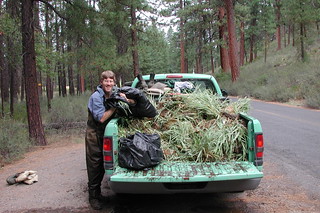 Crews filled a truck bed with the weeds after 12 hours of work. They took the ribbon grass to a gravel pit and covered it with a tarp to kill it. A couple years later, the ribbon grass has started growing in the waterless gravel pit.

“It’s been a very difficult process because, if you had to pick the most sensitive place you could possibly talk about to use herbicides, it might be the Metolius River,” Pajutee said.

That’s a concern raised by Lisa Arkin, executive director of the pesticides watchdog group, Beyond Toxics. Arkin said her Eugene-based group hasn’t taken a position on the use of chemicals to control invasive weeds along the Metolius. But she does have concerns.

“We see these solutions as being more steps on the toxic treadmill,” Arkin wrote in an email.

Mike Crumrine is with the Oregon Department of Agriculture. He’s the main guy wading through chilly waters to apply the herbicide. 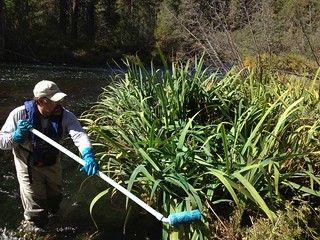 “Wiping the herbicide on with, in essence, a sponge. Rubbing the plant, every bit of the plant that you can get to that’s above water level, is the target goal,” Crumrine said.

There is a small window in the fall when the herbicide can be applied, Crumrine said.

“Looking at what we’re looking at right here, right now. I would estimate we’re looking at a 90 percent reduction. You keep multiplying that over a number of years, and you get it down to where it’s ecologically insignificant,” Crumrine said.

Officials said water quality tests have shown the herbicides haven’t hurt fish or other species in the river.

The herbicides are working, according to those working on the project. They said there are finally a few places where native plants have started to come back.

US Court Dismisses Suit By Youths Over Climate Change

The Rose City Classic Dog Show Is Something To Bark About