If you think trying to carry on a conversation in a noisy restaurant or bar is difficult, imagine how orcas in the noisy waters off a busy port feel.

Marine scientists think rising levels of underwater noise are having a harmful effect on the Northwest’s iconic killer whales. Now the Port of Vancouver, in British Columbia, is spearheading an experiment to temporarily slow down big ships to reduce noise.

The population of resident orcas in the shared border waters of Western Washington and southwestern B.C. has dwindled to 78 individuals. These endangered orcas primarily use sound—including echolocation—to hunt for food, to orient and communicate.

But consider the noise of a passing freighter.

And now listen to the combination as a different large ship comes around a corner and intersects with a pod of orcas.

The nonprofit OrcaLab made the recording along northern Vancouver Island and it doesn’t take long for the ship to mask the orca calls. That could effectively blind the mammals whose ears in a lot of ways are their eyes.

Canadian and American government agencies have identified physical and acoustic disturbance as one of the key threats to survival of the endangered killer whales. Other top threats are lack of prey—salmon to eat—and toxin accumulation.

Slowing things down in Haro Strait

Krista Trounce of the Port of Vancouver is taking a whack at doing something about the underwater noise. Trounce directs the port’s ECHO Program, a project to manage and mitigate threats to endangered orcas from shipping.

“This summer, we are doing a vessel slowdown trial to see if slowing large vessels down can reduce the underwater noise and therefore reduce the knock-on effects to southern resident killer whale behavior.” 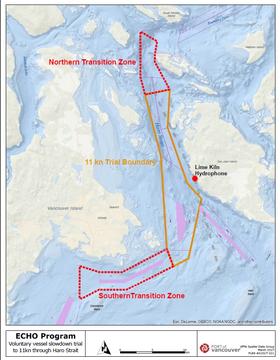 The slowdown corridor is about 16 miles long. Trounce acknowledged there is a trade-off in slowing down vessels because that means they linger longer in the orcas’ presence, albeit less noisily. On balance, she said the modeling predicts a net benefit.

Trounce wants to slow all the ships to 11 knots, which could be close to half speed for a fast container or cruise ship and not much a slowdown at all for a bulk carrier. Eleven knots equates to about 12.6 miles per hour.

“For a cruise ship or a container ship, they may be going 18 or 20 knots. Some of the bulk merchant ships would be more in the 13 to 15 knot range,” Trounce said. “If we slow all of them down to 11 knots, what is that difference?”

A series of underwater microphones will record the drop in decibels.

Getting buy-in from cruise ships and shipping lines

Researchers also have years of baseline observations of orca behavior in Haro Strait for comparison.

“This level of speed reductions may, in theory, reduce sound intensity levels by as much as 75 percent for container ships and 40 percent for bulk carriers,” port research consultant SMRU wrote in a blog post.

Trounce has been working with the cruise line and shipping industry for more than a year to get buy-in on the two-month slowdown from early August to early October.

Last week, Trounce visited Seattle and San Juan Island to do more outreach and coordination, including a public presentation hosted by The Whale Trail nonprofit.

“The more participation we get, the more robust the science is,” Trounce said.

That science could inform possible future regulation. This vessel slowdown is voluntary though, remember. Robert Lewis-Manning is president of the Chamber of Shipping of British Columbia, which represents vessel operators. He expects the strictness of a ship’s schedule, tidal windows at the destination and the weather to figure into case-by-case decisions whether or not to participate.

“This isn’t necessarily new for a lot of our global ship operators and owners, so it doesn’t take much to get their buy-in,” Lewis-Manning said. “There are other places in the world where consideration has been given to vessel slowdowns both to reduce noise and to avoid the risk of striking a whale.”

For instance the approaches to San Francisco and Boston harbors.

“I’d be thrilled if we could get to 70 percent (participation),” Lewis-Manning continued. “I know that that will fulfill the statistical needs to develop solid conclusions. And that would be a good accomplishment to get that many ship operators to participate.”

Lewis-Manning said shippers could suffer as little as no impact up to 40 minutes of delay on a slowed down transit of Haro Strait.

Ship owners listed on the Port of Vancouver website as having committed to participate, “where operationally and economically feasible,” include Seattle-based cruise line Holland America, Washington State Ferries, Westwood Shipping Lines, COSCO, Maersk and more than a dozen others.

“We’re going to participate as fully as we can,” said Greg Wirtz, president of the Vancouver-based Cruise Lines International Association - Northwest and Canada. “It’s relevant to each itinerary differently. Some itineraries are tightly scheduled for time. There might be some where it doesn’t affect them all. Others may have to speed up later to make up the time.”

Trounce estimated there could be 400-450 transits of Haro Strait in each direction during the two month duration of the trial, largely to and from the Port of Vancouver.

Separately, the Ports of Vancouver and Prince Rupert, British Columbia are trying to incentivize quieter ships by discounting harbor fees for vessels that meet low-noise criteria.

Those discounts, which range from 23 percent in Vancouver up to 50 percent off at Prince Rupert, can amount to hundreds or thousands of dollars per port call depending on a ship’s tonnage. The quiet vessel criteria entail hull shape features and propeller noise, vibration and wake flow reduction technologies that mostly have to be incorporated into a ship design prior to launch.

The Vancouver and Prince Rupert port authorities added underwater noise reduction to their existing environmental incentive programs at the beginning of this year.

“As far as we know, B.C. is the first in the world to offer incentives for reduced underwater noise,” Trounce said.

Trounce said 12 vessel calls have qualified for the quieter ship discount in Vancouver so far this year.