Once upon a time, salmon and steelhead swam over a thousand miles upriver to the headwaters of the mighty Columbia River, at the foot of the Rockies in British Columbia.

Those epic migrations ended in 1938 with the construction of Grand Coulee Dam.

This week, tribes from both sides of the U.S.-Canada border along with scientists and policymakers are meeting in Spokane to figure out how Columbia River fish could be restored to their entire historical range. The idea draws passionate supporters, but has unknown costs that you might be asked to help pay.

Salmon and steelhead have been absent from the upper Columbia River for 75 years. But tribes on both sides of border still miss the fish. Colville tribal member D.R. Michel senses an opportunity “to correct a lot of wrongs.”

“The tribes never surrendered to the loss of salmon,” he says. “You see old photos of the chiefs standing on the reservation side looking down on the project with all of those promises of, ‘We’ll take care of you. You’ll have your fish. We’ll put in hatcheries.’ None of that stuff ever really happened.”

Tribes are taking the lead to examine options for restoring migratory fish to the upper Columbia River. Five dams built without fish ladders now stand in the way — two in Washington and three in Canada.

The Bureau of Reclamation’s Lynne Brougher led a tour Monday of Grand Coulee Dam for tribal leaders and biologists from British Columbia and the U.S Northwest. She stopped the tour van in the center of the enormous concrete span so the group could peer over the edge at the torrents of water plummeting down the spillways.

“What you’re looking at here is a 350 foot difference between the water at the base of the dam and uplake in the reservoir,” Brougher explained over the din of rushing water. 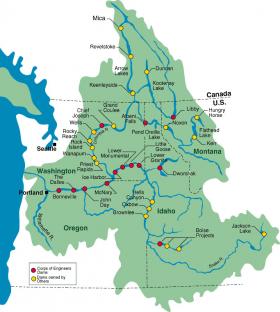 Nobody has built a fish ladder on a dam this high according to Canadian Columbia River Inter-Tribal Fisheries Commission biologist Will Warnock of Cranbrook, British Columbia.

“It would be going into uncharted waters to build that kind of passage facility. There’s other things you can do to get salmon past dams this high, though. You can trap them and manually truck them around the dam.”

That’s one idea. An elevator actually is another. A long fish ladder would be very expensive and a last resort, if tried at all.

A separate suite of technologies would be needed to help juvenile salmon migrating downstream get past the hydropower turbines and long stretches of slack water behind the upper Columbia dams.

Who would pay for this? Nearly all of us, as D.R. Michel sees it. He directs the Upper Columbia United Tribes of North Idaho and Eastern Washington.

“It’s potentially a shared cost between ratepayers, the federal government, farmers and irrigators,” says Michel. “Some of the folks who benefit directly from use of this water and what comes out of this dam should help pay for this also.”

The unknown costs of reintroduction could add up, and that worries the Public Power Council’s Scott Corwin. He represents public utilities who get electricity from Columbia River dams.

The U.S. and Canada are about to open negotiations to renew the 50-year-old Columbia River Treaty. That is the forum chosen by fish advocates to advance their idea. But last week, British Columbia’s government declared it doesn’t want to discuss it at the treaty talks.

A position paper forwarded to Ottawa reads, “British Columbia’s perspective is that the management of… salmon populations is the responsibility of the Government of Canada and that restoration of fish passage and habitat, if feasible, should be the responsibility of each country regarding their respective infrastructure.”

“We are very respectful of the importance of salmon to First Nations,” said provincial Energy Minister Bill Bennett, using the Canadian term for native tribes. But during an interview, Bennett also maintained that ratepayers of BC Hydro should not have to pay more for fish passage. “Our (electricity) rates are already going up in B.C.,” Bennett noted.

Tim Personius, deputy regional director of the U.S. Bureau of Reclamation, says Canada’s position could be a problem.

“The position of the United States is that we should not move forward without Canada participating. I think that’s a good idea.”

Personius says it looks like a lot of the spawning habitat for upper Columbia River fish is in Canada. He says it would not make a lot of sense “for the United States to spend millions or billions of dollars on fish passage” only to have the salmon run to British Columbia and “stub their noses” on a Canadian dam.

The U.S. government is taking an open-minded position in Personius’ telling. But given the many unknowns, “We should kind of approach this cautiously and probably in small steps.”