Mark Elston followed his father into the timber industry back when business was booming.

"When I started, you could really mess things up and still make good money," he said. "You can't do that anymore."

Elston runs a lumber mill in Tillamook, Ore., for Hampton Affiliates. The company has spent millions on energy efficiency and technology upgrades that allow his mill to make the most out of every log.

But despite those investments, the mill was on the ropes after the U.S. housing market collapsed in 2008.

Northwest lumber mills suffered a one-two punch in the wake of that collapse: First, they lost their home-building customers in the U.S. Then, log buyers in China drove up the cost of their feedstock logs.

Even after laying off workers and cutting operations, the mills were still limping along. They needed to make more money on their lumber to make up for the higher cost they were paying for logs. They also needed new customers.

The answer? Hampton started asking Chinese companies to buy lumber, too. Elston said it took another round of investments before Hampton had the expertise to cultivate a customer base in China and produce lumber those customers wanted to buy.

But investing in lumber exports has paid off for his mill. 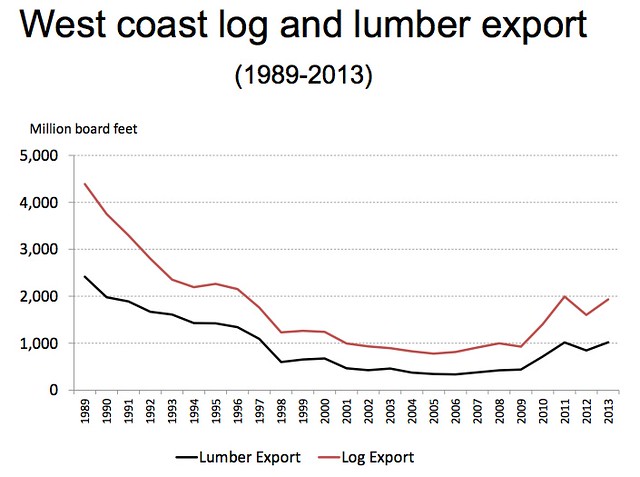 The Northwest timber industry's export story of late hasn't been about finished lumber, though. It's been about raw logs. Log exports from the Northwest grew by another 20 percent last year, and they've doubled since 2009.

The surge in raw-log exports coincided with a dramatic drop in demand for lumber for home-building in the U.S. –- a drop that was devastating to Northwest lumber mills.

"We had the Great Recession in the U.S., and it was horrific on our industry and our company in particular," said Steve Zika, CEO of Hampton Affiliates. "We didn't close any sawmills but we were laying off people because we just didn't have demand in housing in the U.S."

The Chinese economy wasn't having that problem. In fact, China was in the midst of a building boom. So, timberland owners in the Northwest started selling raw logs to China instead of local mills. And as more and more logs were sold overseas, the price of those logs went up.

"We haven't seen log prices as high as they currently are in over 10 years," said Gordon Culbertson, a Northwest forest industry analyst with Forest2Market. 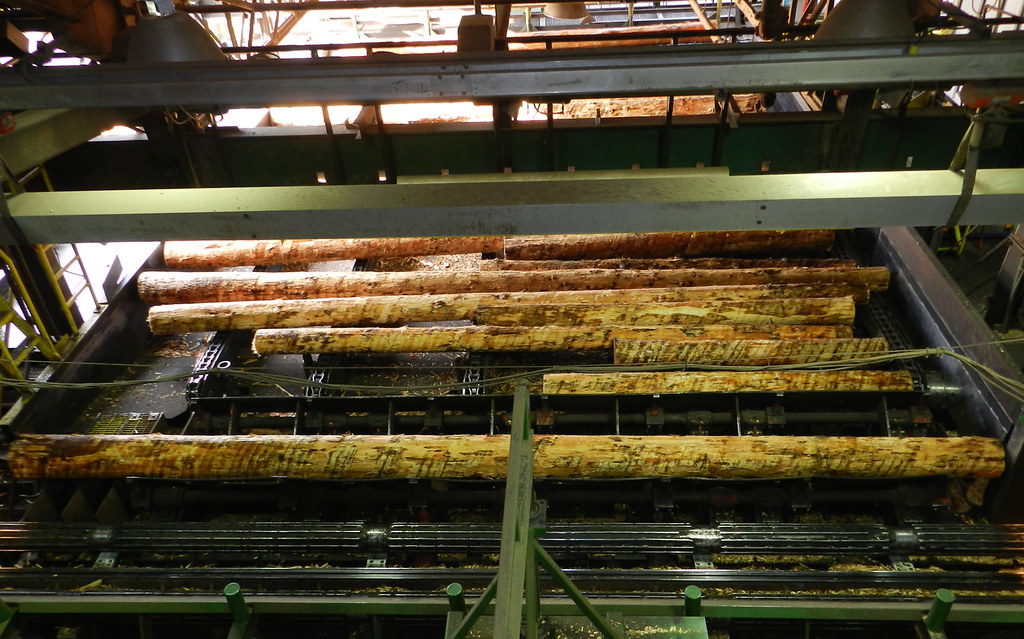 Sawmills, of course, need raw logs to operate. And thanks to rising log prices, their operating expenses were going up up at time when business was already down.

As the U.S. economy started recovering, Northwest mills were competing for logs with their counterparts in China. Chinese sawmills were receiving the raw logs from the Northwest and cutting them into lumber that was primarily being used to make forms for concrete buildings. 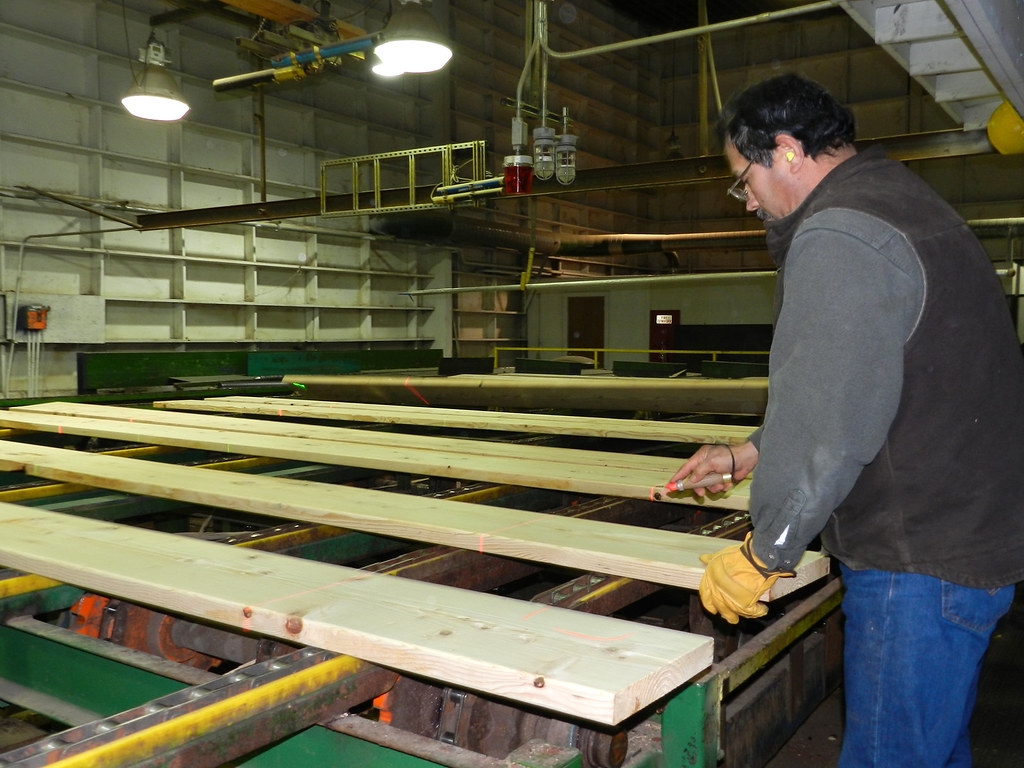 Getting China To Buy Lumber Instead Of Logs

The fact that logs were bypassing local mills on their way to China reignited a debate over whether log exports are actually good for the Northwest economy. While log exports helped buoy forest landowners and loggers during the recession, they put local mills at risk.

"I think everybody would agree that it would be better if Oregon logs were processed into higher-value products in Oregon," said Oregon Department of Forestry economist Gary Lettman. Research shows sending logs to local mills creates three jobs for every million board feet of timber while exporting the same volume of logs adds less than one job to the local economy.

"There are considerably more jobs from domestically processing logs than there is from exporting them," Lettman said.

China's building boom has also spurred Chinese companies to import lumber -- just not nearly as much lumber as raw logs. 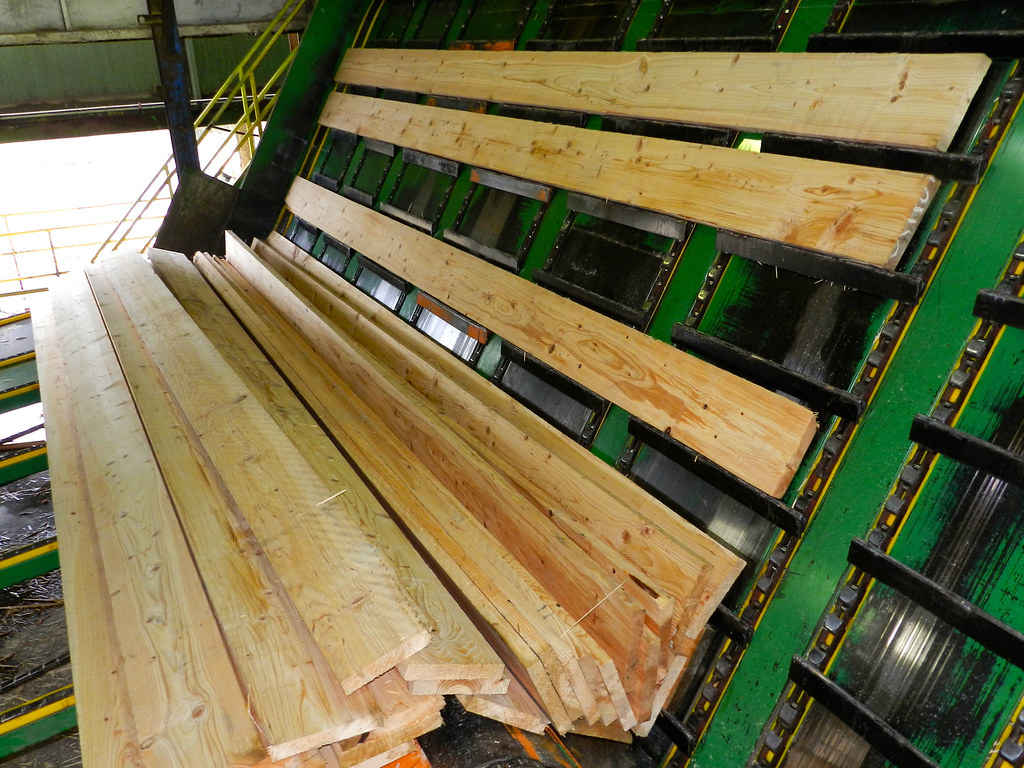 Zika says sawmills could still be in trouble if log exports continue to grow. A new log export proposal for the Port of Newport is dangerously close to his company's Tillamook mill and could compete for logs from some of the same timberland the mill relies on.

"I will be the one who has to go down there and tell them that we may have to close this sawmill down if the log export situation doesn't change," Zika said. "That's what keeps me up at night."

Zika's strategy to preserve his company's sawmills –- in Tillamook and elsewhere in the Pacific Northwest –- is not to shut down all log exports but to get more Chinese builders to buy lumber instead.

"We've somehow got to convince them to buy lumber versus logs," Zika said. 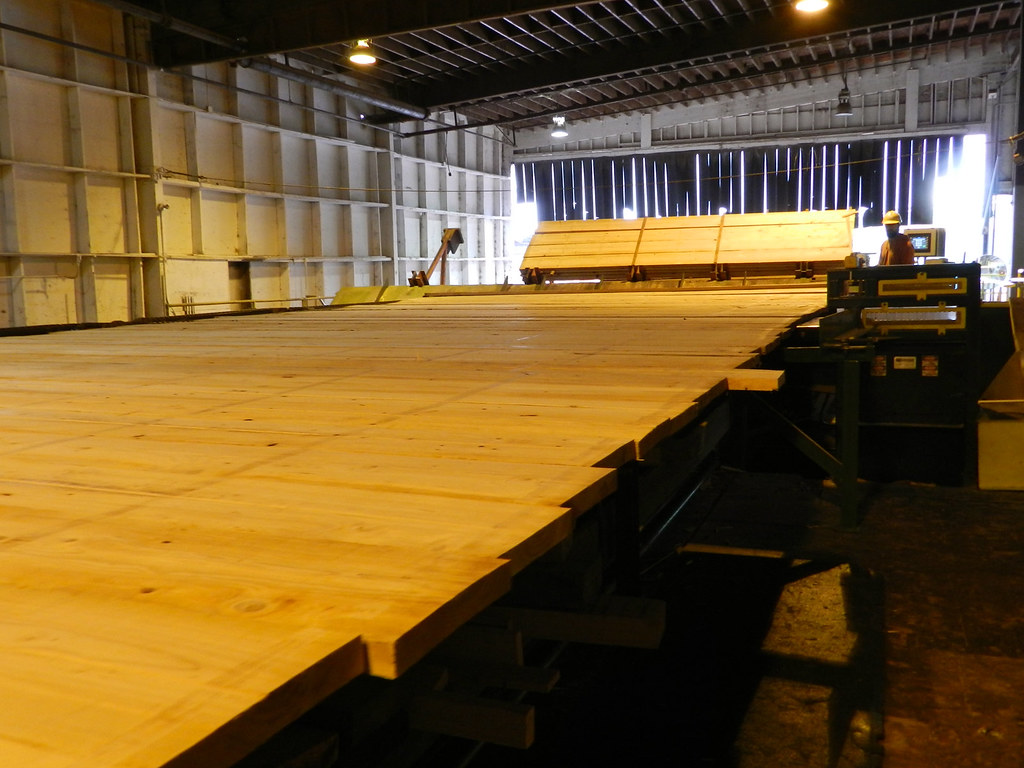 Half of the lumber made at Hampton's Tillamook mill is
exported. Credit: Cassandra Profita

Hampton's effort to export lumber to China started when the company was shopping for new customers to make up for the dismal U.S. housing market. Zika said he found a lot of potential in China.

"It's hard to picture until you go over there," he said. "It's huge. There's so many people. There's just a lot of opportunity over there. They don't have a lot of their own wood products."

But changing operations to sell lumber into Asian markets wasn't something that could happen overnight. There are language barriers and logistical hurdles. Unlike logs, lumber has to be packed in containers before it can be shipped. That means you can't ship lumber out of any port. Hampton had to get its lumber onto ships at the Port of Portland. It had to hire new people, change its sales office hours to cater to its new customers across the Pacific, and adjust its sawmills to cut lumber in new dimensions. 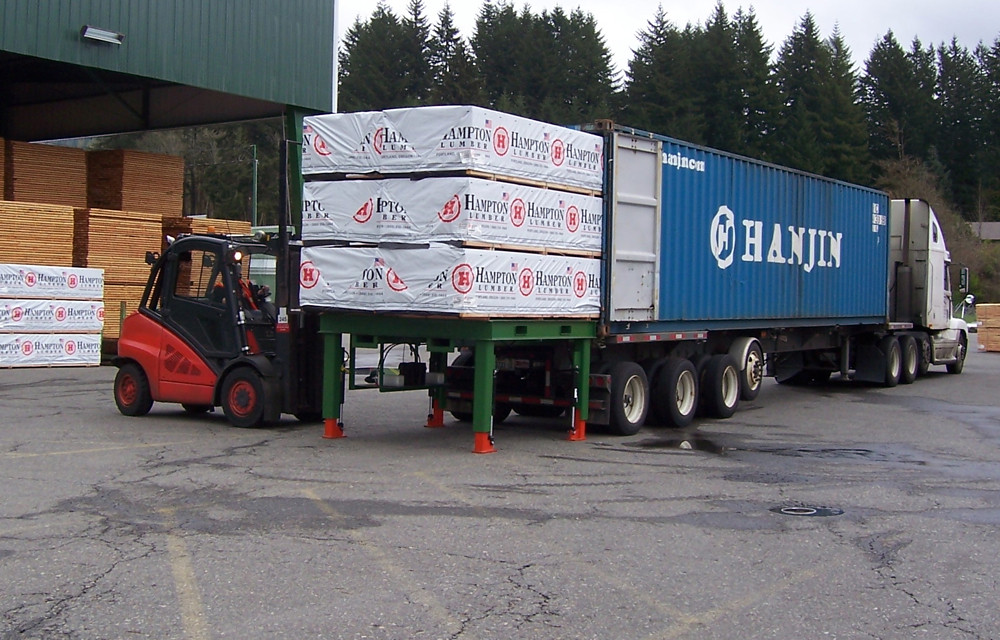 Lumber from Hampton's Tillamook mill gets trucked to Portland, where it is loaded into containers for shipping overseas. Credit: Hampton Affiliates

"It's hard," Zika said. "It requires more working capital, more patience. It's not just picking up a phone and saying, 'Hey, here's the building products company in China.' It doesn't work like that. You have to develop relationships."

Kit LaBelle, Hampton's global logistics manager, said shipping lumber to new overseas markets has been a game-changer for the company. In five years, Hampton has gone from shipping about 5 percent of its sales to Asia –- China, Japan, Korea and Taiwan –- to 25 percent. And it's not just exporting lumber from its own mills but from other mills as well. 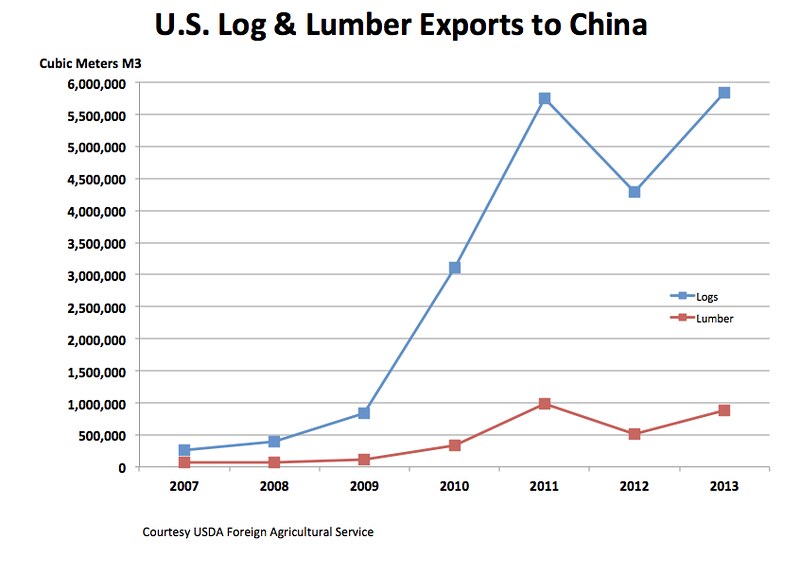 "Our company grew quite a bit on the international side," LaBelle said. "There's a lot of cargo we didn't used to do, but now we know how. I think there's a lot of hope that sending lumber overseas will open another door for the business as a whole."

LaBelle said the same principles that drove up log prices –- lots of demand competing for a limited supply –- could also drive up lumber prices.

"If we get rid of a whole bunch of lumber here, it creates a bit of a shortage," she said. "Then the domestic price would go up because all of a sudden you have less wood because it's gone overseas, right?"

Hampton's mills are still running at two-thirds of capacity, but Zika's hoping that could change if lumber prices go up.

"If lumber prices continue to go up, then we can out-compete the Chinese for logs," Zika said. "If the sawmills can pay more for logs, maybe the Chinese won't match those prices. And maybe they'll find another market to get logs from."