Openings on the Oregon Fish and Wildlife Commission have sport fishing groups eyeing an opportunity to gain a voice while some environmental groups worry they’ll lose one.

Two members are up for reappointment and another seat is vacant on the commission, which sets natural resource policies ranging from hunting and fishing rules to last year’s decision to remove gray wolves from the endangered list.

The recreational angling industry hopes one of its longtime advocates, Liz Hamilton, can become one of the seven members of the commission, which it says has tilted too far toward commercial fishing interests.

Hamilton runs the Northwest Sportfishing Industry Association. She submitted a letter of interest to Oregon Gov. Kate Brown earlier this summer expressing her interest in joining the commission. It included endorsements from Sen. Ron Wyden and Reps. Earl Blumenauer and Kurt Schrader, along with several prominent figures from the sport fishing community.

“The Commission is in need of a voice that strengthens the connection between the agency, everyday anglers and hunters, and the multi-million-dollar sportfishing and hunting industry that operates in our state,” Hamilton wrote.

Environmental groups are supporting the reappointment of Greg Wolley, who they consider one of the commission’s strongest voice for conservation. He is also the first and only African-American member of the commission.

Eight organizations signed a letter in August asking for Wolley’s reappointment without delay.

“Given the very public statements that both ODFW and the state have made about the need to diversify and to make sure that our governing and decision making bodies reflect the state’s changing demographics, I believe it would be a huge step backward to reduce diversity on the commission,” said Quinn Read, the Northwest Representative for Defenders of Wildlife.

Wolley said he has not sought any group’s endorsement but appreciates their support.

He said the current commission is one of the most balanced he can remember, and that he wants to continue shifting the agency to reflect the state’s changing demographics, which includes the bulk of residents who do not hunt or fish.

“If me being an African American is significant for the department, and how ODFW is trying to change and get with the times, so much the better,” he said. “But I’m passionate about environmental work. I just kind of do what I do, and I’m a brown guy at the same time.”

Because Hamilton and Wolley are both from Oregon’s 3rd Congressional District, in the Portland area, they are vying for the same commission seat.

However,  Brown could decide to reshuffle the commission (see graphic) and appoint both of them. Brown’s office said such a move does not have precedent, and that the governor has not decided whether it is a viable option.

How The Governor Could Keep Both Sportfishing and Conservation Groups Happy

Three Oregon Fish and Wildlife Commission positions due for reappointment are outlined in red. Candidates Liz Hamilton and Greg Wolley  live within Oregon’s 3rd Congressional District, which can only have one resident on the commission. But Gov. Kate Brown could move Michael Finley, who lives in the 2nd Congressional District, into a vacant seat to make room for them both. 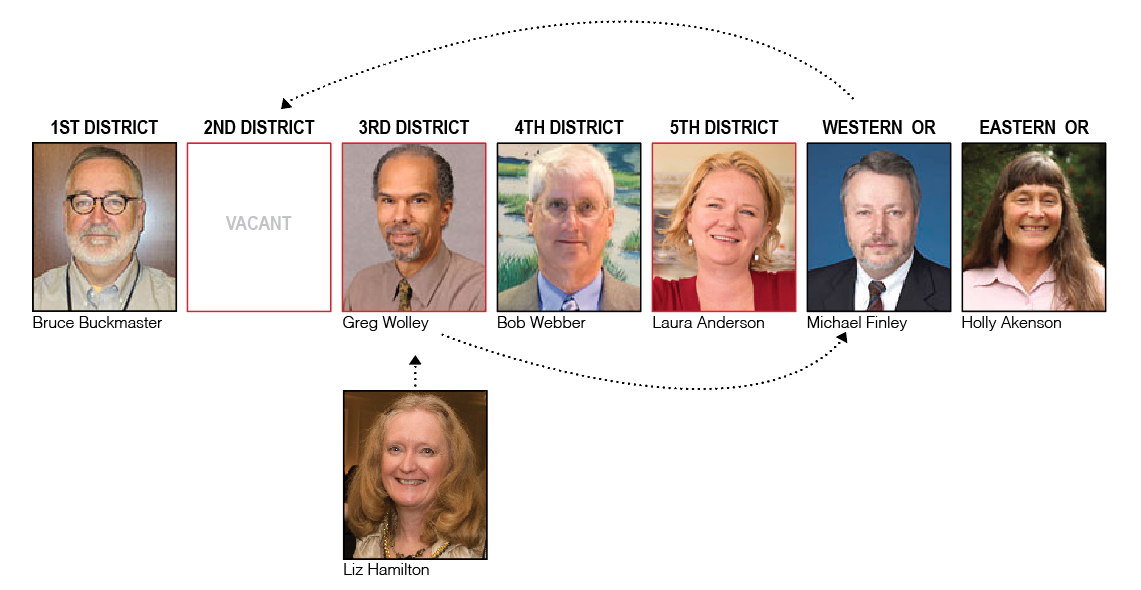 Hamilton said she did not intend to challenge Wolley and expected he would continue to serve.

“I’m not interested in pushing out anyone from the Fish and Wildlife Commission,” Hamilton said. “If there’s an opening that fits and that I’m a good fit for, then I am stepping up to serve.”

The makeup of the Fish and Wildlife Commission has long been a political issue, highlighted in recent years by attempts in the legislature to require members have hunting and fishing licenses and to create a special committee of interest groups to appoint new members.

The governor’s office said it has received 21 applications for the commission so far and roughly 100 letters of support. It does not yet have a timeline for appointments.

Blue Pigment Discovered In Oregon Cleared For Broad Commercial Use