MEDFORD, Ore. -- The U.S. Fish and Wildlife Service has a new plan to dramatically increase protected habitat for the Northwest's dwindling number of spotted owls. The feds are also moving ahead on safeguarding the mild birds by shooting barred owls, their invasive competitors.

The agency Wednesday morning released details, including a proposal to designate almost 14 million acres as critical habitat for the owl. That's nearly three times the 5.3 million acres of federal forest that a 2008 plan identified as necessary to the threatened bird's survival. Before the plan is adopted, the larger acreage -- on federal, state and private lands -- is likely to shrink as the plan undergoes scrutiny.

The U.S. Fish and Wildlife Service was required to revise that 4-year-old recovery plan and designate new critical habitat by a court order, after the Inspector General of the Interior Department found it was jeopordized by political influence.

Interior Secretary Ken Salazar spoke in broad strokes about the plan in a press conference Tuesday, but offered few details. He noted that in spite of conservation efforts, the spotted owl population has declined by 40 percent since 1985, due to loss of old growth habitat and competition from the barred owl.

The secretary said that in a departure from past policies, some kinds of logging and active forest management would be allowed in areas designated as habitat for the owl.

This critical habitat proposal recommends substantially increasing active management of forests in areas designated as critical habitat. This is an important change because it will allow us to do more work in the woods. It will mean sustainable timber jobs," Salazar said.”

He suggested that the kinds of logging permissible in owl habitat would be modeled after a series of ecological forestry pilot projects, developed by professors Norm Johnson of Oregon State University and Jerry Franklin of the University of Washington.

The projects encompass a range of different forest management ideas, from non-controversial thinning of dense stands to reduce the risk of fire to more dramatic ecological regeneration harvests in mature forests, meant to re-create healthy young shrub and grass ecosystems.

In another departure from past policy, the U.S. Fish and Wildlife Service has indicated that the proposed new critical habitat for the spotted owl will also include 1.6 million acres of private land and state forests, in addition to federal forests designated as owl habitat.

"There are zero private lands in Oregon that are part of this proposal," said Dan Ashe, director of the U.S. Fish and Wildlife Service. "The only private lands involved are lands in Washington and California."

The Service says that a critical habitat designation on private and state land doesn't necessarily mean major changes in land management or a logging ban on those lands, but that it impacts activities that require federal permits or funding.

The spotted owl critical habit plan will be revised after a period of public comment, and Ashe suggested his agency is open to pursing conservation agreements and other voluntary methods of conserving owl habitat on private land.

"US Fish and wildlife has decided to remove ahead with a combination of lethal and non-lethal removal of the barred owl," he said, adding that some barred owls would likely be shot. 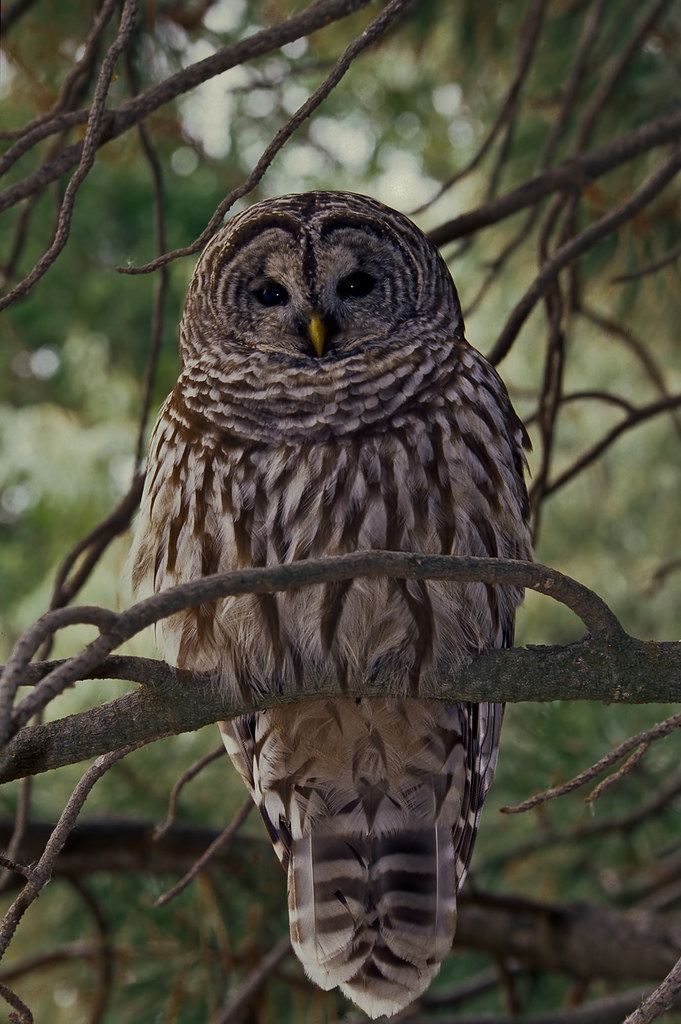 Barred owls look similar to spotted owls but have a different diet and distinctive hoot. The species, originally from the East Coast, has spread rapidly across the Northwest.

Anecdotal evidence and some published research has suggested that barred owls drive spotted owls out of the best habitat and are in part responsible for their rapid decline in Washington and northwest Oregon.

Ashe said the Fish and Wildlife Service will experiment with barred owl removal strategies for 3 to 10 years to determine whether eliminating the competitor species is a realistic way to bring back spotted owls. He acknowledged that killing one species to save another raises possible ethical issues, but said it is a strategy the Fish and Wildlife Service has used successfully elsewhere.

"We control wild hogs and racoons that are feeding on sea turtle nests. We control brown-headed cow-birds that are competing with endangered warblers. This is not new to wildlife management" he said.

But Ashe added that removing the barred owl would require an extermination program on a scale the U.S. Fish and Wildlife Service has never attempted.

A Shrinking Population of Spotted Owls

The map above shows the results of long-term demographic research on spotted owls in 11 study areas between 1985 and 2008. Earthfix adapted data from the study _Population Demography Of Northern Spotted Owls._

In eight of the study areas, primarily in Washington and the northern part of Oregon, scientists found strong evidence for declining populations of spotted owls.

In four of the study areas-- Southern Cascades, Klamath, Tyee, and Hoopa-- the changes in owl population scientists detected were small enough they could not conclude with certainty whether spotted owl populations were stable or declining.

The map above shows an annual rate of decline for each owl study area. In the Rainier study area, for example, the owl population shrank by approximately 7.1 percent each year. At that rate, the total population drops to half its size in about 10 years.