You Know Your Car's Fuel Efficiency. What About Your House?

The first month's electric bill at my new house was a shocker: $348. Granted, the house has electric heat, and the bill was for February when it got pretty darn cold in Portland. But still – yikes!

So, when I heard that Portland homeowner Brooks Shephard cut his monthly electric bills from $280 to $100, I had a vested interest in learning more.

Turns out Shephard is the first Oregon homeowner to get an energy performance score, or EPS, for an existing house.

Until the first winter months come, that is.

Shephard said it wasn't until his first December after buying the place that he realized "the house was kind of like Swiss cheese." 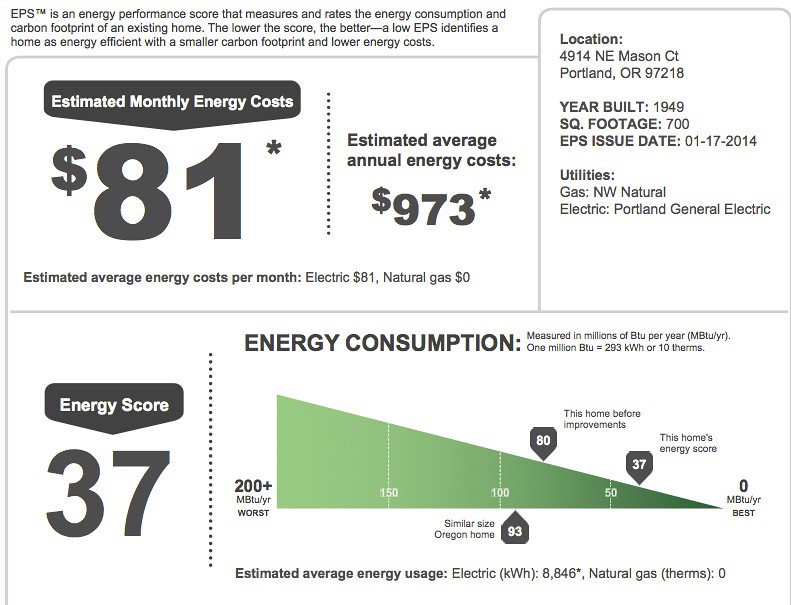 The EPS for Brooks Shephard's house in NE Portland.

"It's a great little house in Northeast Portland," he said. "As far as I could tell, the house was pretty secure. But it had baseboard heaters. Baseboard heaters are pretty much like heating the house with a toaster. It was a constant battle. I'd get cold and turn the heat up, and then it was too hot, so I'd turn it down. Twenty minutes later it was cold again."

The 700-square-foot house wasn't even comfortably warm, and he got an electric bill for $280. He considered the possibility of signing up for Clean Energy Works Oregon, which enlists a local contractor to do a home energy audit and make recommendations for improving energy efficiency. The program offers homeowners a loan to cover the cost of upgrades.

"I looked at the program for a long time, but I'm a skeptic," he said. "It seemed like somebody's trying to make a buck somewhere. But the more I looked into it, and considered how tight money was at the time, I realized it made sense for me."

Shephard enrolled in the program and got a loan for around $6,500 to cover the cost of replacing his baseboard heaters with a super-efficient ductless heat pump, adding new insulation and replacing the windows. After completing his energy efficiency upgrades, Shephard said he knew he wanted to get an energy performance score for the house.

"I wanted to be able to show what I'd done," he said. "It's hard for new homeowners to check these things. I wish I would have had that information for myself. I had to go through the first winter to figure it out."

Nicolette Hanna, Shephard's real estate agent, used to work for Clean Energy Works. She knows as well as anyone that the operating costs of a house are often overlooked in the housing market. She's excited to see what energy performance scores might do to help the market recognize the value of energy efficiency. She said Shephard's EPS allowed her to start a different kind of conversation with potential buyers.

"I saw wheels turn that don't normally turn when people are thinking about purchasing a home," she said. "You can see the granite countertops. You can see the hardwood floors. But you can't see the energy performance of a house, which is often a concrete expense."

Hanna presented the EPS concept to potential buyers at an open house. A similar home has an EPS of 93, she told them. This one had a score of 80 before the improvements. Now it's 37.

Shephard bought the house for $185,000 three years ago and listed it for $249,500 this month. Last week, he accepted an offer for more than the asking price.

So, now I have to ask: If more homes had energy performance scores, how would that affect the housing market?

Remember when gasoline prices went up, and everyone started shopping for hybrid cars? Suddenly, fuel efficiency became much more important. And how convenient that we have a measurement to compare the fuel cost of driving one car versus another. What would happen if homeowners had the option of choosing more energy efficient homes? Would homeowners end up doing energy efficiency upgrades before they put their homes on the market? And would we all, then, use less energy altogether?

Those kinds of questions explain why energy efficiency geeks are celebrating Shephard's house hitting the market this month – and being on track to sell for more than the asking price.