A Guide to Haze in the Columbia River Gorge

Thousands of people enjoy the Columbia River Gorge each year. They splash in the waterfall pools and hike the trails. They swing their cars to the side of the road to photograph Beacon Rock, the Bridge of the Gods, Mount Hood, windsurfers and rain forests.

But few people return home with a clear pictures of the beauty there because haze shrouds the gorge.

The Columbia River Gorge stretches more than 85 miles and includes almost 300,000 acres in Washington and Oregon. It's a natural funnel for all kinds of pollution that fouls visibility.

In the winter, farm and power plant pollution flow through from the east. The result is gray haze that masks the views that Congress deemed important enough to designate the gorge a National Scenic Area. That designation, however, does not give the gorge the same level protection that national parks receive. In the summer, urban emissions sweep through from the west. In the winter, pollution from farms and coal-fired power plants push through the gorge from the east. (Story continues below.)

SUMMER SOURCES OF POLLUTION IN THE GORGE

(EGUs are Energy Generating Units, such as coal-fired power plants.)

WINTER SOURCES OF POLLUTION IN THE GORGE

The Columbia River Gorge is home to the worst haze in Western United States. Conditions could

improve in 2025 after the closure of the two coal-fired power plants--one in Boardman, Ore. and another in Centralia, Wash. Future visibility, however, depends on many variables, said Rick Graw, who monitors air quality in the Northwest for the U.S. Forest Service. Population growth and new sources of pollution could stymie efforts to battle haze. (Story continues below.)

POLLUTION MAP OF THE UNITED STATES (2004) 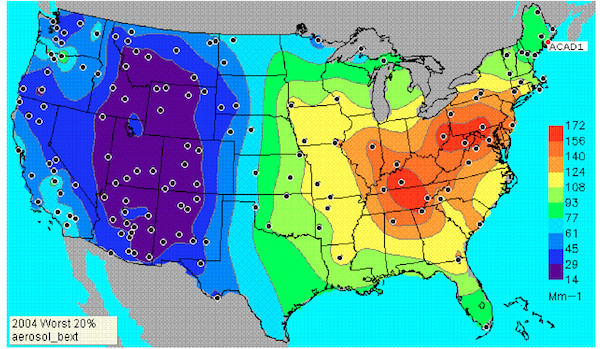 (Data represents the 20% Worst Days for 2004 as represented by aerosol. The underlying data is gathered from IMPROVE monitors and reported through the VIEWS website. )

The Columbia River Gorge Commission is charged with managing the gorge scenic area. It's amended management plan requires it to "protect and enhance" air quality in the gorge. The work of monitoring air quality falls to the U.S. Forest Service, Washington State and Oregon, which have completed several studies of gorge air quality. And the commission is responsible for using the information to lobby for better air quality in gorge.

One group, the Friends of the Columbia River Gorge, recently sued the commission, claiming its management plan will not protect and enhance the scenic area.