Over the past four years, the federal government has picked up the tab for 20,000 electric car charging stations installed across the country.

For a growing number of electric vehicle drivers, that's great. It means they have a lot more options for places to recharge, thanks to stimulus funds from the American Recovery and Reinvestment Act.

But now that federal money has been spent, and there are still a lot of places without charging stations. So, the electric vehicle industry is now wondering: Who's going to pay for the next 20,000 chargers?

Last year, Ecotality, a company that tapped federal funds to install hundreds of car chargers throughout the Northwest, filed for bankruptcy.

At the Future Energy Conference in Portland Tuesday, other companies that build and install electric car chargers said it's hard to make money on charging -– in part because the electricity itself is pretty cheap. 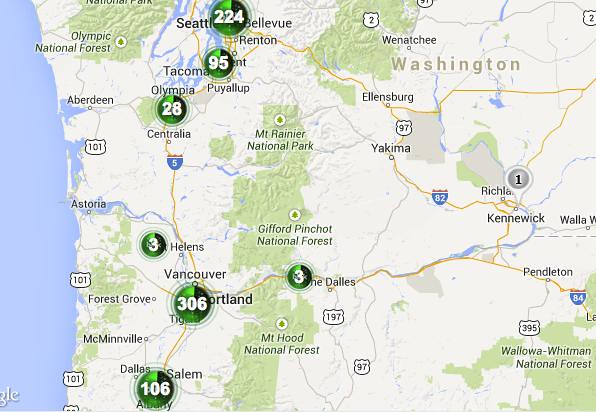 A map of charging stations installed with stimulus money.

"If you take your Nissan Leaf from empty to full the value of that electricity is about $2 or $3," said Jeff Allen, executive director of the electric vehicle industry group Drive Oregon. "So, that's great for car owners, but it makes it really hard to build a business around selling $2 worth of electricity."

The industry is exploring a variety of options for paying for public electric car charging stations – the ones electric car drivers rely on to refuel on the road. Here are four of the concepts being discussed:

Private companies are working to build a network of charging stations at existing businesses. But to convince businesses to pay for the installation, they're thinking about how to make these stations more attractive to customers and even self-supporting. A free charging station could draw in customers the way free wireless Internet attracts people to a coffee shop. But if the car owners don't pay for the charger, who does? 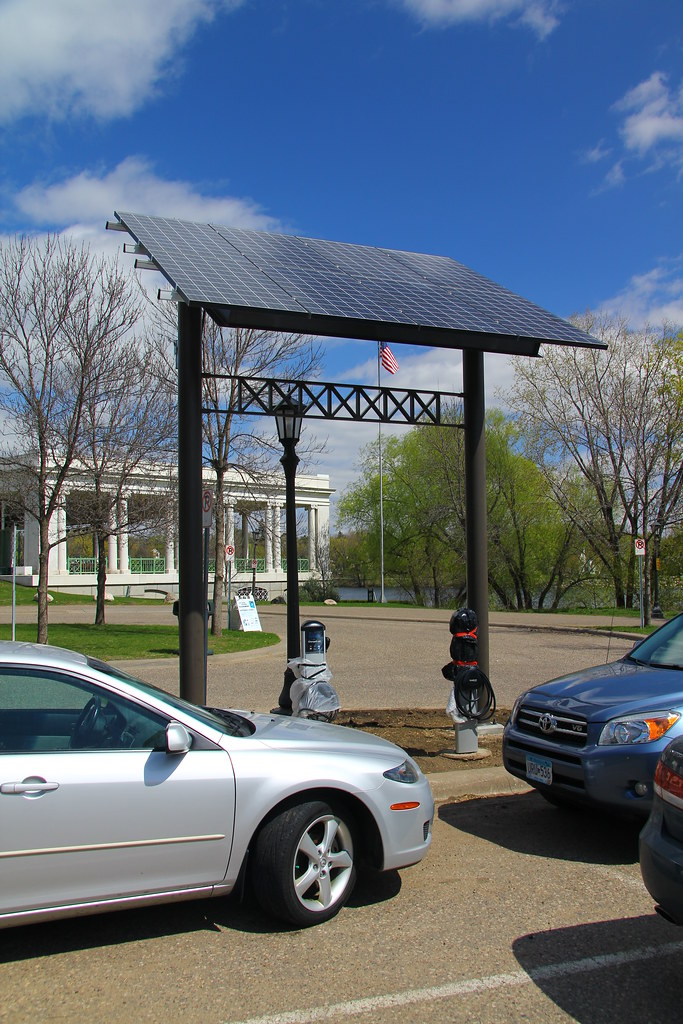 Two Portland companies are working to answer that question. EV4 has added solar panels above its charging stations that fill an on-site battery with electricity. That offers a speedy recharging option for car owners and also generates income from selling excess power to the grid.

Another company, OpConnect, has built its charging station like a giant smart phone – with lots of apps and options for businesses hosting the station and for customers using it.

The OpConnect charger monitors its charging stations so it can tell car owners whether it's available and how many people are in line for charging. It notifies people through their smart phones when the charging station is open.

All these options make the stations easy for EV drivers to use. They also allow businesses to decide whether they want to pay so their customers don't have to. Or, business can offer some customers a discount or a tiered price for car-charging that would discourage people from plugging in and hogging a space all day. 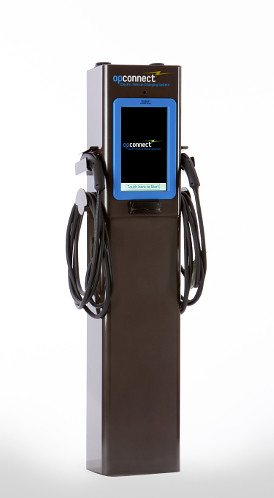 A smart charger or a parking meter?

Both EV4 and Opconnect are looking at options that would allow car chargers to double as other money-making services so the charging itself wouldn't have to pay for the cost of the station.

"In the absence of sufficient cars, you won't have income from charging," he said. "If the canopy is installed, we'll have advertising income from the canopy. The LED screen brings $1,200 a month in advertising minimum."

OpConnect has a similar advertising feature on its touchscreen, as well as an optional billboard that attaches to the top of the station for additional display space.

"We share that income with the site owner," Turner said. "We want to make it easier for the site owner to plop down the $10,000 to install it."

Turner's company also has another idea: Why not use the technology in its smart charger as a paperless parking meter?

"Instead of having dollar bill collectors for parking, we'll administer parking by using our touch screen," Turner said. "For that property owner, it kills two birds with one stone. They were going to have to install a parking kiosk anyway. Now they can use the one that also does electric car charging."

Could employers help expand the network of charging stations as part of the benefits they offer to their employees?

That's a question a lot of electric car companies are asking. Allen says Drive Oregon, too, has stepped up its efforts to convince employers to install car chargers for the same reason they have bike racks for people who bike to work.

"It doesn't cost very much," Allen said. "It shows that you're a progressive employer and a good place to work and a good community member. We're starting to see more and more of that kind of charging coming in." 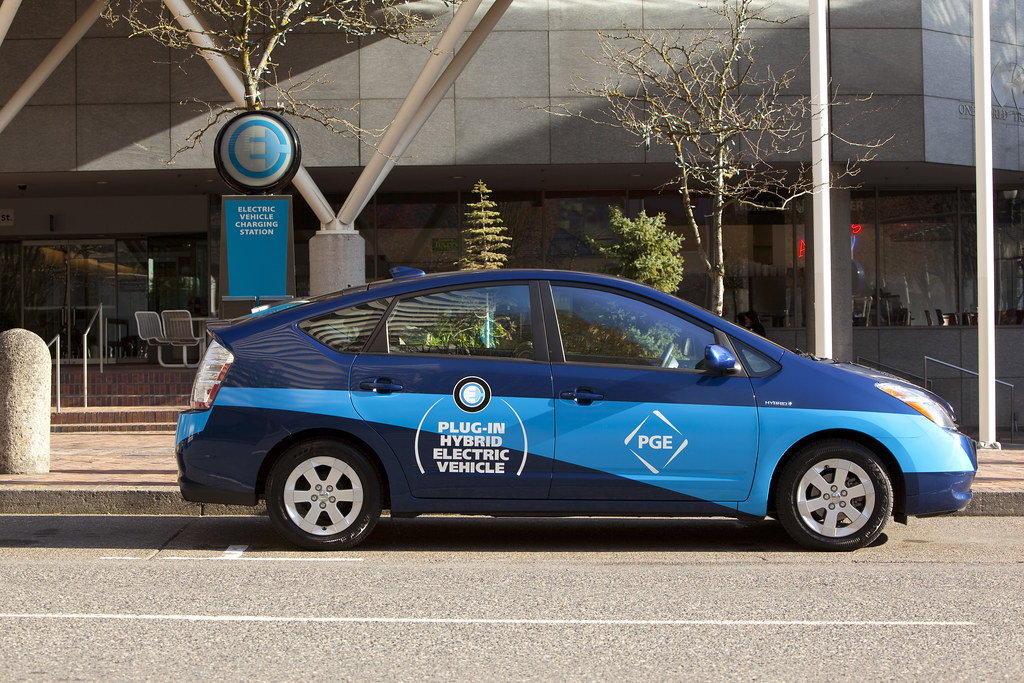 Should employers and taxpayers pay for charging stations?

As the industry looks for new sources of charging stations, it's hard to ignore electric utilities, which have a vested interest in the expansion of electric cars.

Stan Sittser of Portland General Electric made the case for driving on electricity on Tuesday.

"You can get off the roller coaster of gasoline pricing and get the heartbeat of consistency in pricing for electricity," Sittser said, pointing to graphs of the wild upward swings in gasoline prices and a smooth, low-slung line of electricity prices. He said he isn't worried about straining the electrical grid with more electric cars.

"The grid can handle it," he said. "Everybody's going to get the power they need."

Allen said the nice thing about getting utilities involved in car charging is they know exactly where the grid has electricity to spare. They're also the first people electric car drivers turn to when they have questions about refueling. But there are rules restricting utilities from taking over the electric car charging marketplace. Allen says the industry is reconsidering those rules.

"Early on there was concern that it could be hard to compete with a regulated utility," Allen said. "In a number of states regulators have said utilities can't provide charging at all. Now, lot of advocates are coming together to say we need utilities to be real active participants in this space."

Sittser said his utility would be happy to step in where other companies can't.

"I think we can help," Sittser said. "Let utilities on the field. Maybe we can do more."

A question remains, however, about how much of the costs the utilities would pay out of pocket and how much should be picked up by taxpayers via the local government as part of a public service like street lights.