VANCOUVER, Wash. -- Even with two recent oil-transport accidents to point to, opponents of a controversial oil terminal weren't able to persuade port commissioners Tuesday to reverse their July approval of a lease for the project.

They asked Port of Vancouver commissioners to vote against the Tesoro-Savage terminal lease this time around – or at least delay the vote until safety and environmental concerns were addressed.

But their arguments didn't change the outcome. The port commission voted once again to approve a lease for the project. And once again the vote was unanimous – just like the vote in July.

The Tesoro-Savage oil terminal would transport 360,000 barrels of crude oil a day through the Port of Vancouver - making it the biggest such operation among several underway or in the planning stages in the Northwest.

The project would deliver the oil by rail from the Bakken oil fields of North Dakota and transfer it to barges and ships on the Columbia River. The oil would then be shipped to refineries on the West Coast.

The port commission's re-vote on Tuesday follows a lawsuit filed by environmental groups, who argue the commission violated state public meetings law before its first vote on the project.

The night before the port commission first approved a lease for the project in July, the board held a workshop with a public hearing followed by a closed-door executive session. Port Commission President Jerry Oliver told people in the audience twice that the board would discuss their comments in that executive session.

But Washington public meetings law only allows the board to hold executive sessions for certain reasons. Discussing public comments isn’t one of them.

On Tuesday, Port Director Todd Coleman said the port failed to cite a clear reason for holding the closed-door session in July, and it didn't announce a clear ending time for that session as required by law.

"We do admit we did have some shortcomings in our process," Coleman said. "We're moving forward under the assumption that the first vote was not effective. That means we do not have a lease with Tesoro-Savage."

But, Coleman said, the problem is "relatively easy for us to cure" with a re-vote. 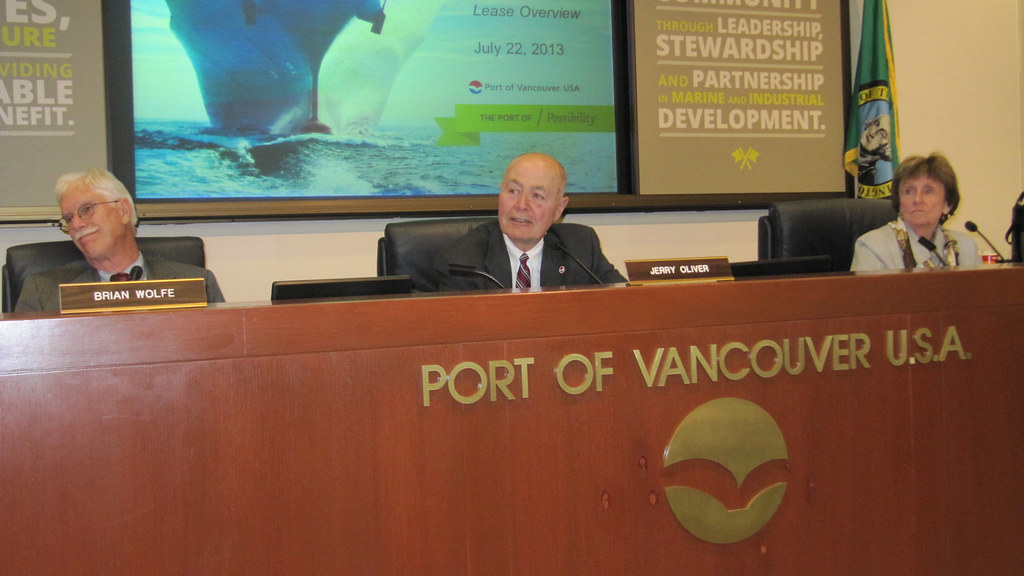 Columbia Riverkeeper attorney Miles Johnson told the board before its re-vote that he wasn't sure the additional meeting would cure his organization's complaint – in part because the public wasn't notified of the Tuesday meeting until late last week. Columbia Riverkeeper is one of three environmental groups that sued the port to reverse its first lease approval.

"We think the decision would be better re-done with more public access and more meaningful public participation," Johnson said. "We think anything less than a full explanation of what happened in executive session doesn't meet the obligation to cure what went wrong."

Commissioners didn't address what happened in the July executive session at Tuesday's meeting. After the re-vote, Johnson said his organization is still considering how to respond to the board's action.

Port Commissioner Brian Wolfe asked officials at BNSF Railway what their industry is doing to improve the safety or railroad cars, and how the rail lines in the U.S. compare with the ones in Canada where the most recent derailment took place.

Terry Finn, director of government affairs for BNSF in Washington, said the industry is working to improve rail car safety.

"In the most recent derailment we heard about ... there was a mix of oil and liquefied petroleum," Finn said. "We don't mix those kinds of substances in our oil trains. ... You can bet the entire industry – every Class 1 railroad and every short line – is looking at that accident to make sure it's not repeated."

Before the vote, Wolfe expressed concerns about the fact that the Port has to approve a lease for the terminal before the project has gone through the full state permitting process. Tesoro Corp. and Savage companies recently applied to the Washington Energy Facility Site Evaluation Council for the full suite of permits they will need to build and operate the terminal. The first public meetings on that permitting process are scheduled for Monday and Tuesday of next week in Vancouver.

"We're a little bit cart before the horse having to make this decision before safety and environmental issues have been addressed," Wolfe said. "Tell me where I'm wrong."

"I'm not ignoring the fact that a lot of oil is going to move through the Gorge," Oliver said. "Bad things can happen, but we're taking realistic precautions and I feel confident we can address the concerns."

In the end, Wolfe said the Port of Vancouver is well-equipped to oversee the project.

"With the safety issues and environmental issues locally, nobody's in a better position to control that than the Port of Vancouver," he said.

Oil Terminals In The Northwest