The Oregon Department of Agriculture confirmed Tuesday its investigation uncovered multiple violations of pesticide law by Pacific Air Research, including that the company allowed pesticides to fall on neighboring properties, according to a news release.

ODA also stated that Pacific Air Research applied an herbicide above the maximum amount allowed by the label and provided false records that misled the state's investigation. Both are violations that could result in civil penalties.

Because of the seriousness of the incident, ODA states, the agency is cooperating with the U.S. Environmental Protection Agency to address potential violations of federal pesticide law.

The helicopter pilot at the center of an aerial herbicide-spraying controversy in Southern Oregon applied a far wider variety of toxic chemicals than what he originally reported, according to newly released documents.

Those documents are part of an Oregon Department of Agriculture investigation that will be the subject of a media briefing Tuesday.

The investigation was launched last fall after ten families complained that Pacific Air Research and its helicopter pilot, Steve Owen, had allowed chemicals meant to kill vegetation at a nearby logging clearcut to reach their homesites in the nearby community of Cedar Valley.

Owen had indicated in a report he submitted to the Oregon Department of Agriculture that he had sprayed the clearcut with only Roundup Original – an herbicide commonly used by householders and landscape professionals alike.

But documents from the Oregon Department of Agriculture investigation conclude that in addition to Roundup, Owen applied seven other herbicides: Oust XP, Weedone LV6 EC, Element 4, Arsenal, Polaris AC, Accord XRT II, and crop oil. The active ingredients in those herbicides are the chemicals glyphosate, sulfometuron methyl, 2,4-d ester, triclopyr, and imazapyr.

Owen did not respond to interview requests.

The families that filed the complaints reported seeing a helicopter pass over their homes, smelling an unfamiliar smell, and feeling ill on Oct. 16, the same day Owen was applying herbicides to the logging clearcut.

None of the products the pilot was determined to have sprayed are considered dangerously toxic to humans. However, there are important differences between their health effects and those associated with Roundup, which is manufactured by Monsanto. For example:- Triclopyr is one of relatively few herbicides than can be absorbed through human skin and can cause skin sensitization.- Some forms of 2,4-D can cause serious eye damage. All forms of 2,4-D are particularly toxic to dogs. Several families in Cedar Valley reported sick pets and at least one dog is being treated by a veterinarian who believes its illness is the result of herbicide exposure.

The pilot also appears to have initially failed to disclose to the ODA that he was working for two different timber landowners that day. The records show that Owen was spraying two units to the west of Cedar Valley that belonged to Crook Timberlands and a third unit to the southeast of Cedar Valley that belongs to a man named Joseph Kauffman.GPS flight data obtained by the state shows that the pilot made eight trips across the valley, ferrying chemicals from Crook’s larger spray site to Kauffman’s land. That detail corroborates first-hand accounts that the helicopter flew repeatedly over homes in the small community. [A Crook Timberland manager had previously denied that the helicopter flew over Cedar Valley homes that day.](http://www.businessweek.com/ap/2014-01-10/feds-to-review-oregon-timberland-herbicides-probe "") 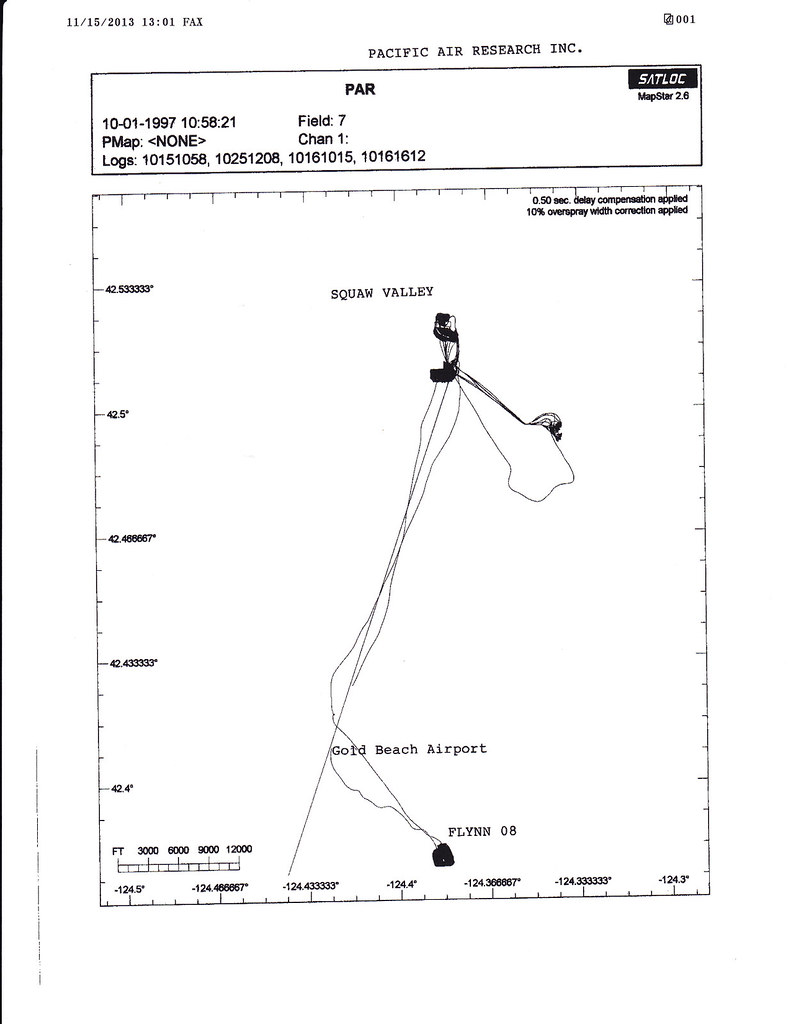 The Oregon Department of Agriculture released to OPB spray records, tests results, and emails concerning its investigation in response to a public records request.

The group Beyond Toxics had also filed a request for the records. ODA initially claimed the records were exempt from disclosure, but released them after the the Oregon Department of Justice informed ODA it was required to do so, in response to an appeal filed by Beyond Toxics.

Residents in Cedar Valley say they have been trying for months to get the Oregon Department of Agriculture to provide information about their possible exposure to herbicides, and in December, with the help of Beyond Toxics, they filed a petition asking the Environmental Protection Agency and the Centers for Disease Control asking for an epidemiological study.

But in many cases, ODA's investigators did not share what they knew with the citizens who had filed complaints, according to these newly released documents.

For example, on Oct. 23, investigators met with John Burns, assistant chief of the local volunteer fire department and one of the Cedar Valley residents who complained of feeling ill. They collected leaves from the apple trees in his yard to test for herbicides that might have drifted or dripped off target. The records show that the investigators received preliminary results from an ODA lab on Nov. 27 showing trace amounts of 2,4-D and triclopyr on the trees.

However, Burns said was not informed of the trace herbicides on his trees until April 3 -- the same day OPB received documents through its public record request.

"The information that we have received from them has not been forthright and honest,” Burns says.

Investigators appear to have made little effort to correct the public record when it became apparent, after chemical tests were conducted on the Crook Timberlands site, that Roundup was not the only chemical that had been sprayed.

For example, documents show that on Oct. 28, lead investigator Mike Odenthal wrote to Gary Hill, one of the complainants, and told him of the report that Glyphosate had been sprayed. In December, Hill wrote back to Odenthal, asking him for an update on the case and whether test results had confirmed what chemicals were used.

“When I have either called or written in the past, you have always been able to get back to me. But in this case, I have not heard from you,” Hill wrote.

“We are at a point in the investigation that we really can't share a lot of information without compromising our case. We are still gathering evidence and reviewing it. As soon as we get to a place where we can release data I will get it to you,” Odenthal wrote back.

The newly released documents from the Department of Agriculture do not appear to support the claim, made by the advocacy group Beyond Toxics, that the agency failed to share what it knew with doctors and veterinarians in a timely manner.

Fern Fitzgerald, a Brookings veterinarian, has been treating a dog that may have been sickened by herbicide exposure in Cedar Valley. According to an email, ODA immediately provided Fitzgerald with the names and Environmental Protection Agency registration numbers of five products it believed had been sprayed in Cedar Valley. Fitzgerald confirmed to OPB that she received all the information she requested.

Oregon Department of Agriculture spokesman Bruce Pokarney has declined to answer questions while the investigation is ongoing. Asked if the state had made an effort to correct its initial reports that only glyphosate had been sprayed on the sites, Pokarney cited a statement made at a Pesticide Analytical Response Center board meeting in Salem on Jan. 15.

The records released to OPB from the case show ODA has found pilot Steve Owen and his company Pacific Air Research violated multiple regulations in the Cedar Valley spray incident. However, they do not indicate what penalty Owen will face. ODA pesticide program manager Dale Mitchell said the penalty will likely be fines ranging from $750 to $10,000. Pacific Air Research and pilot Steve Owen will be allowed to continue aerial herbicide applications. ODA says it will monitor the company more closely.

Rick Barnes is a Crook Timberlands manager. He declined to comment on the trace amounts of herbicides found on area residents’ property. Barnes has said he's confident that no herbicide drifted off the clearcut and onto the property of Cedar Valley residents.

Correction: April 8, 2014. The Oregon Department of Justice ordered the state Department of Agriculture to release investigative records in response to an appeal filed by the group Beyond Toxics. Beyond Toxics' role in this process was not accurately portrayed in an earlier version of this story.